Born in 1967, Sellner grew up on a farm in Maryland where he once more resides. He pursued a life in ordained ministry until 2007 when he retired early to focus full-time on his creative career.

He is a published writer of comics, film and audio dramas, as well as an author of prose, fiction and non-fiction. His artwork has been displayed in galleries, locally and internationally, been published in print and online, and featured in prime-time television series.

Sellner focuses his work through Visionary, where he oversees all creative projects, work-for-hire and in-house services. He recently joined Outland Entertainment as their Licensing Director, and now heads up their licensed imprint Outrider Publications. He is also the primary architect of the Visionary imprint debuting from Outland in 2023.

How long have you been in the entertainment or creative industry?

All told, I guess about 18 years now. The first several were very sporadic involvement while my life was focused elsewhere, then the shift started happening in 2007, and I made the jump to full-time creative and freelance work in 2009 and never looked back.

You left ministry to go into writing and creating comics? That's quite a leap, how come, what happened to move you that direction?

Both have always been part of who I am. I've been a creative type since a child, still have the very first comic I created when I was about 5 or 6 years old, an issue of Superman, by the way. Ministry however was also very important to me, and I felt very called into that in high school and pursued it as a primary focus. I was a very dedicated-driven kind of guy in that work, worked very long hours, and gave myself fully to it for 25 years. I always knew there would come a time I'd be ready to step back, and then the creative life could become the center. That happened in 2007.

I loved my life then, and love it now, very different, but both very fulfilling.

How'd you get your start in the industry?

I had done a few submissions dating back to college age, all amateur hour stuff, nothing developed. I actually got my foot in the door on a more business angle, helping some small publishers and studios with management, marketing, development. Did that a couple years and then decided I wanted to build my own thing, which led to Visionary.

Visionary is quite a name, kind of sets a high benchmark.

It does, it does indeed, and that was quite intentional. I think a name can be a pretty powerful thing, and say a lot about the company and the people behind it. I wanted to set out to create a company that forged its own path, did its own thing. I wanted a name that was something to grow into, rise up and live out. I think its been a good name for us, and we still work on living up to it every day.


So, what kind of credits do you have to your name? You seem to wear a lot of hats?

I guess it does seem that way huh? Wow, what all have I done? Like I said, I managed a few previous operations, helping launch one small publisher, and expand another studio operation, so I worked a lot of angles on that end of the business. I've got professional credits in published work as editor, writer, colorist and artist. I've written prose, both fiction and non-fiction that's been published in newspapers, journals, books and online. I've written screenplays, including full-length features, down to short-form web series. I've done coloring work on a variety of projects, as well as cover and print illustration work that's been featured in comics, books and television. There's a lot more than even most folks who follow me know, as a lot of it was done on the side, under pen names, or as ghost work, back when I was starting out.

The last few years for me have been all about building the studio, so my hand has been in to one degree or another on every project that bears our name, most especially the Deadlands line we launched. Now of course, with joining Outland Entertainment and heading up Outrider Publications my focus has shifted to developing an entire line of prose and comics, while still picking up the odd writing gigs elsewhere.

What's your role as CCO for Visionary?

It varies. It can range from very involved hands on work where I'm actually crafting the story, involved in the art, and overseeing a project at every step, like I'm doing for my own books I'm prepping, to more of a backup oversight role working with full teams doing the actual creative work and I provide the support.

Tell us about MY COMIC LIFE? What possessed you to lampoon your life on a weekly basis in an ongoing webcomic?

It keeps me humble. I think a lot of us in our industry are overly serious a lot of the time, we take a lot of what we do very seriously, jump on little issues and turn them into big serious issues, and sometimes I think folks can lose perspective.I used to deal with life and death situations on a fairly regular basis, so while I love the medium and love the industry, at the end of the day its pretty hard for me to get too over the top on anything in this line of work. 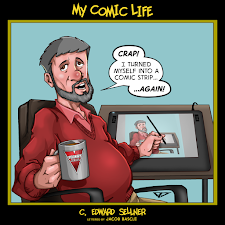 I wanted to do a comic strip that kind of put things in perspective, helped creators to look at the richness of their lives and laugh at what sometimes feels like overwhelming challenges and see they're really not that big a deal.

I figured if I was going to poke fun at the whole entertainment industry, especially comics, I'd best do it in a way clearly tongue-in-cheek, affirming my love for all things that are in that industry, and the best way to do that was make it about MY comics life. If you can't laugh at yourself longest and loudest, best not to laugh about anything else.


What's the deal with Outland Entertainment and Outrider Publications, and this Visionary imprint?

Well, I was introduced to Outland Publisher Jeremy Mohler late in 2021 and we hit it off great right from the start. I was looking for a publisher to partner with and develop projects for prose, comics, and games, and Outland seemed the perfect fit, so we formed a join venture where each company supplemented one another - Visionary taking over creative services for Outland, and Outland now being publisher for everything Visionary related. We then got to talking about ramping up some licensed projects and that led to me taking on the Licensing Director position in Outland. We then signed our first major deal with Pinnacle Entertainment Group which led to a dedicated imprint for works based on Pinnacle's original properties, which became Outrider Publications.

Last but not least, I've been ramping up a number of personal projects and started looking at curating a select group of other creator-owned projects we'll be releasing under a Visionary imprint to debut late 2022, early 2023.